“Security for all”
by Judith Pedroza
When one has the desire to embark upon a life project embodied in art, the initial questions are: Why Do I want to work?  With Whom Do I want to share a direct dialog?
And which pieces would I like to put together in the same space to make a coherent art statement?
(4 ) Artists
We have shared a myriad of daily-lived experiences: personal, generational, and contextual questions and insights.  In a place like Mexico City we experimented with artistic resistance, growing up in the moment where an artistic scene was forming. Over time, we saw museums, schools, galleries, and collections emerge from the labored efforts of contemporary artists born and raised in the “city.”
Argentinean born Rodrigo Sastre decided to leave the University of Buenos Aires in his last year of study.  He had come to the realization that his education was “incomplete.”   He enrolled in “La Esmeralda” School of Art in Mexico City, seeking a different analytical paradigm.  Since then, he has worked under the tutelage of established artists.  Over the last seven years, he has worked in his principle medium, drawing, with an intense focus on North American popular culture from the 80’s. Hector Ivan Delgado (MX) belongs to the Educational Public Institution in Mexico City. From this work (the total bureaucracy) he has developed workshops on social justice and equity. Orlando Díaz (MX) is a studio artist , with a primary interest in painting. He has forged a pictorial engagement with invented characters, and a collection of anecdotes that reflect the human capacity for destruction. And I, Judith Pedroza, with an unusual education between Design and the Arts, have spent the last few years working in collectives with the idea of bringing groups with different art interests together to dialogue.  Most recently, my life has been occupied with various endeavors:  Changing my area of academic study, exchanging books with professors and students, and battling with political groups, “Grupos de choques,” to save my family home in Mexico City.
Agitprop Gallery + David White
I heard about the Agitprop project through other artists.  I found a small door  (a small hole) in North Park, San Diego, which provided a space for complete sculptural reflection.  For David White, the gallery owner, Agitprop is not the culmination of a space, it is the idea of constructing a network and relationship between these ideas of art in a specific community, an amalgam of interests, while including locality and looking for interstices in which to implement artistic reflections, while, at the same time, pushing for debate. Later, I saw his piece entitled “monument” where he set up a work desk and created mini-replicas of the Washington Monument. White problematized an artistic mass, his material is the spaces of the locality,  like a social sculpture more current than that of Beuys with instructions as in the works of Erwin Wurm or maybe in the sense of the “Yelding Stone”: Kneading (mixing) the “locality”.
The Pieces (Segurity for All)
“Waiting for the title” (Héctor Iván Delgado) is a labyrinth of soldiers, knights, cowboys, Indian toys, like a memory of the first game (and game rules) learned in childhood: playing war, playing to violence, choosing a role, the importance of accepting the fact of  “winner and looser,” the strategies of arranging and negotiation. A labyrinth, like an existing myth in every culture, is a connotation of “transformation”, where the art’s cultural myth is insecure, not transparent, playing with alternate forms like information transfer, permissible to change, reevaluation or deletion. What we know of  “Establishment” is fractured but can be transformed by reflective movements in the culture, in other words, by the inspection and revision of facts and the energy of circulation. 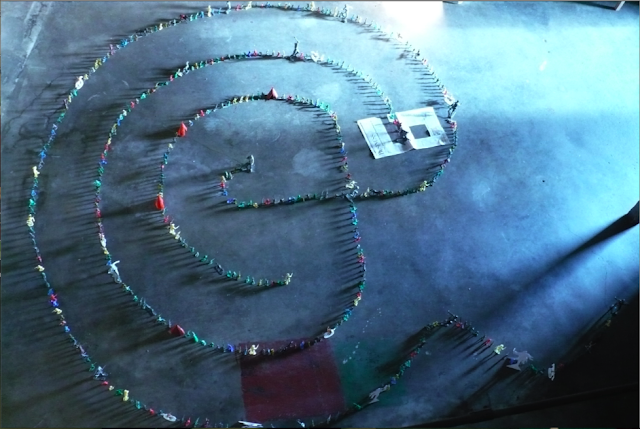 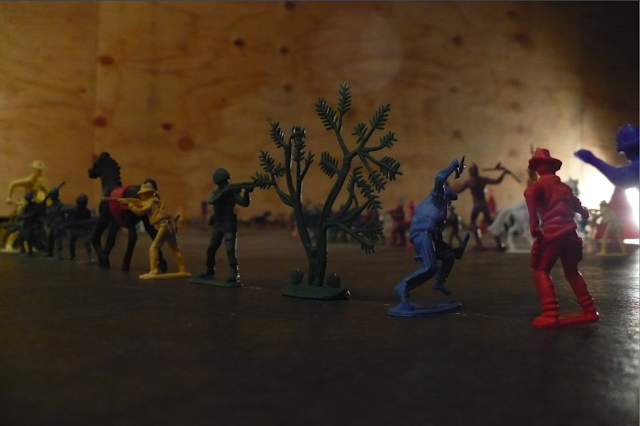 Orlando Díaz in his “Structures of Protection” draws on his reflections about the base where the artistic community is situated.  The structures that support the floor, represent the construction which is not a controlled historic event, but rather a myth, a ritual, a disjointed connection, a fake and stuffy market economy. On the top layer the artist anchors his own support, thinking about his humanity as that of a “pig,” which embodies the negative connotations of being dirty and stupid, or like a tree protected by its own wood or like the girl in the middle of fractured disorder. 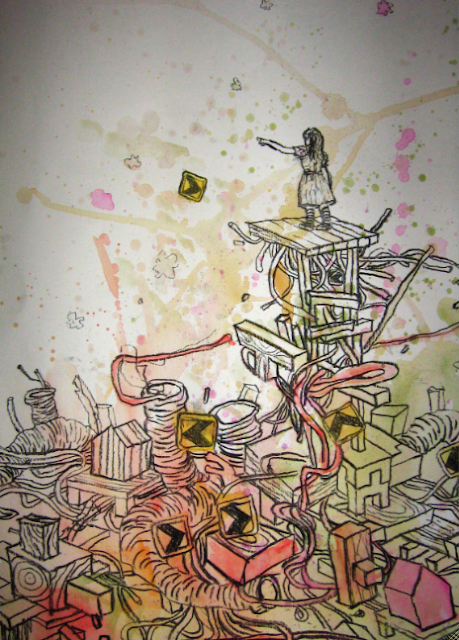 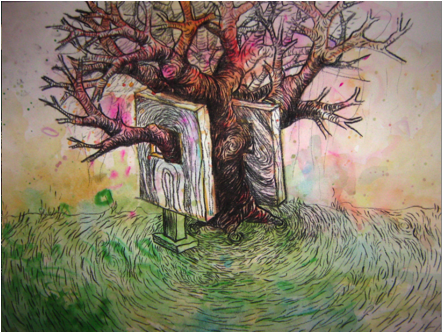 “South” (Rodrigo Sastre) is an experimental animation piece grounded on a book written by the Spanish painter Velazquez entitled “The interpretation of Meninas.” The artist is disguised as a robot, multiplying himself into two characters that fight and reconcile, making war, only to then formulate convenient treaties in order to have it both ways. The artist doesn’t want to disassociate from the robot representing modernity.  And yet, the robot without a soul and mired in a repetitive action, the one that fights with the individual also wants to be transformed. This indicates a self-transformation: “I change so as to not disappear.” 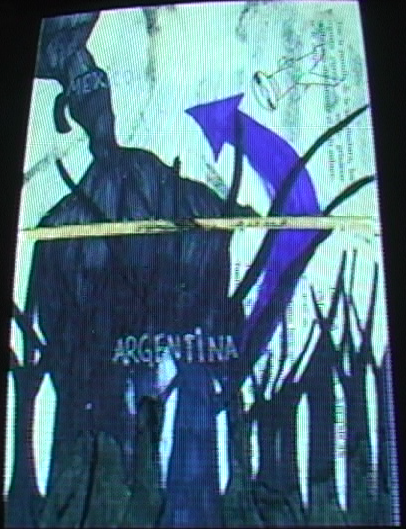 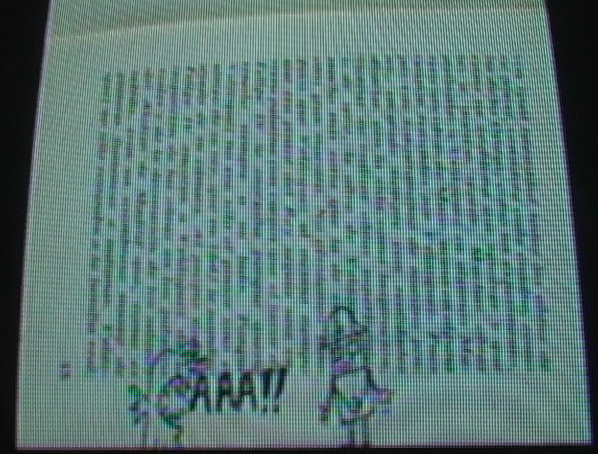 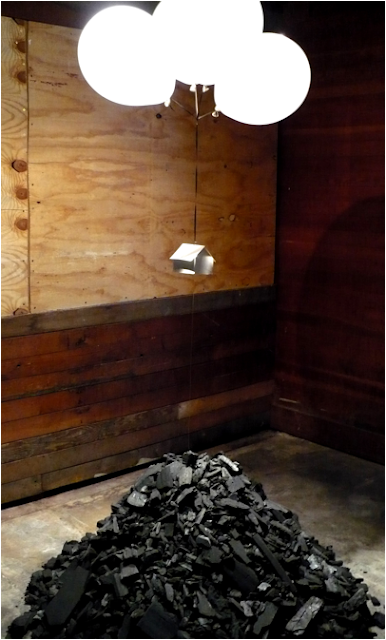 “There’s a house by the sea”(Judith Pedroza) a little paper house suspended by two forces of resistance: helium and coal. Everyone has an idea of “home,” the house of childhood, the house of  dreams and the future. In U.S. culture the myth of the house is a culmination; the dimensions of the house translate into obtained achievements. The principle of the myth of the “established security” carries insecurity in itself. The house falls on the unstable coal pile .  This artistic endeavor defines the conservation of an artistic creative state of mind, reflective and suspended, waiting for the epiphany. In order to keep a float my creative energy, my task is to keep the little house suspended in the air. 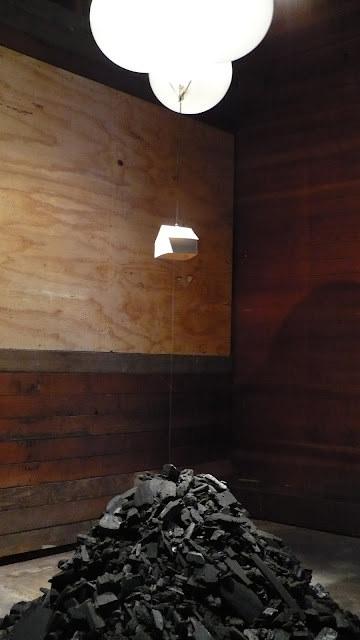 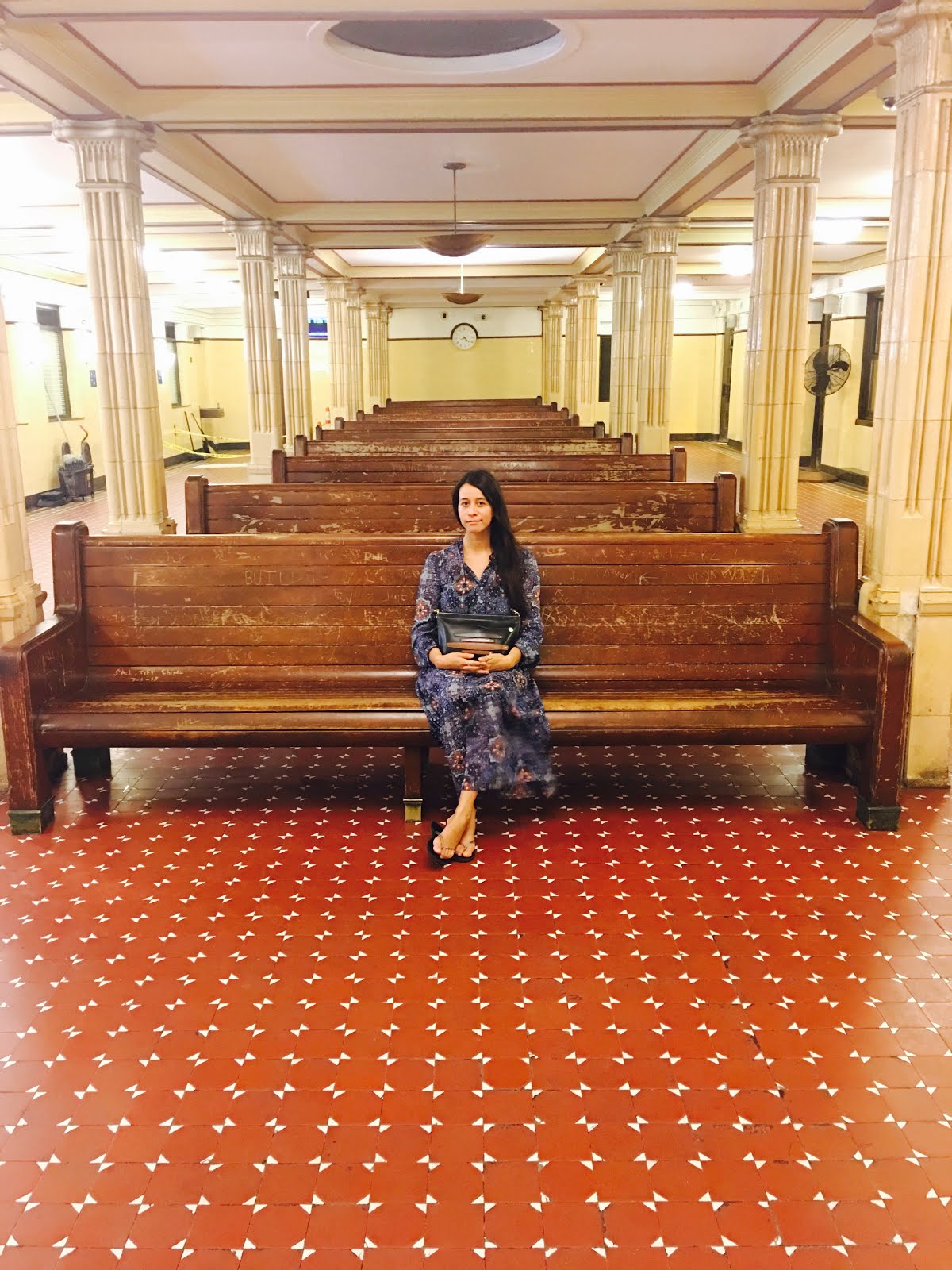